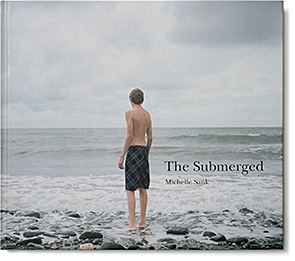 Michelle Sank’s practice is concerned with the notion of encountering, collecting, and re-telling. She is interested in creating sociological landscapes, interplays of human form and location that are significant in their visual, sociological, cultural and psychological nuances.

The imagery in The Submerged was produced within Mid Wales in Abersytwyth and the surrounds, a coastal and hilly area existing at the end of the railway line. Sank became intrigued by the way both structures and people interacted with the urban and natural make-up of this environment. She was drawn towards a sense of grittiness and resolution within the geological and architectural fabric of the place, something so often mimicked in the light, colour, dramatic skies and the human performance within.